The Entrepreneur of the Year Award celebrates its 26th edition to highlight once again this year the exceptional achievements of women and men, drivers of French growth and competitiveness.

Prestigious juries gather in 7 major French regions to analyze the applications received and to nominate the winners by region. On September 25th, in Nantes, Christophe Goasguen, C.E.O. of IMEON ENERGY received the EY “Born Global” award for the Greater West region in France, which rewards the company director whose model has the greatest potential in the international market.

“As soon as the company was created, the international dimension was immediately obvious to me,” says Christophe Goasguen “and this trophy rewards the efforts of the company and employees to market our solar inverters all over the planet.” 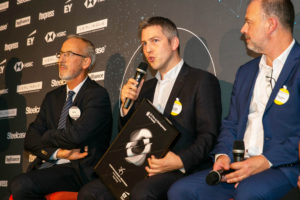